The center’s director co-organized the event, an opportunity for scholars to discuss Indigenous publications and print culture as part of the center’s ongoing initiative, “On Native Ground.” 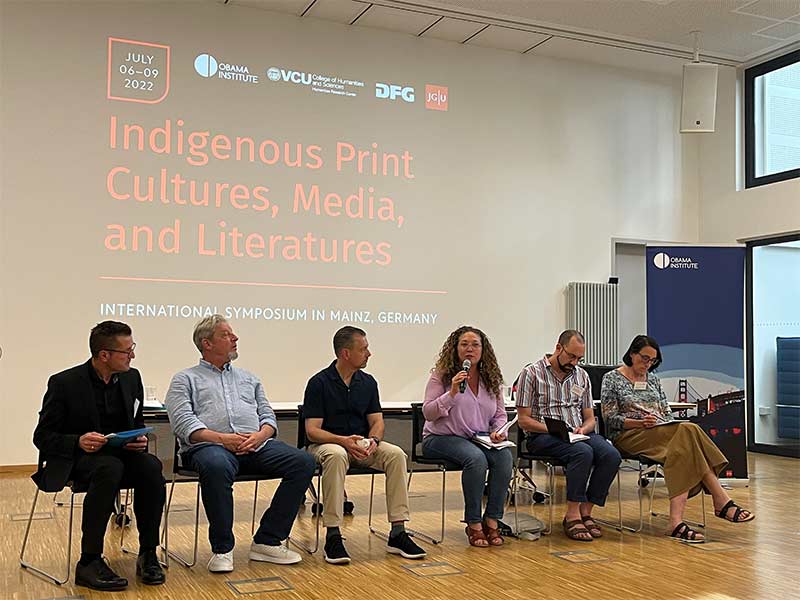 The director of Virginia Commonwealth University’s Humanities Research Center led an international symposium in Germany earlier this month to reflect on the past, present and future directions in Native American and Indigenous Studies, focusing on print publications.

Cristina Stanciu, Ph.D., the director of VCU’s Humanities Research Center and an associate professor in the Department of English at VCU’s College of Humanities and Sciences, co-organized the Indigenous Print Cultures, Media, and Literatures symposium, held July 5-9, 2022, at Johannes Gutenberg University in Mainz. Stanciu collaborated with counterparts at the Obama Institute for Transnational American Studies at Johannes Gutenberg University.

The Humanities Research Center at VCU, with support from the Office of the Vice President for Research and Innovation and the College of Humanities and Sciences, led the effort as part of its ongoing initiative, “On Native Ground.”

VCU’s Vice President for Research and Innovation, P. Srirama Rao, Ph.D., spoke at the symposium, commending the organizers for their work, which directly addresses two of VCU’s research priority initiatives: enriching the human experience and achieving a just and equitable society.

“These two initiatives work hand-in-hand with the research and public humanities efforts led by our Humanities Research Center. We are deeply committed not only to local but also global Indigenous communities and look forward to supporting our community of scholars who help advance two key aspects of our research mission,” Rao said. “The work of the humanities is more relevant now than ever before as we confront the grand challenges of our time.”

“As we continue to face pressing challenges—generational disparity and historical inequity, climate change and other forms of national trauma—a return to the humanities is essential for understanding the past so we can build a sustainable future. The work of the imagination, coupled with qualities the humanities teach–empathy, ethics, understanding difference, research and analysis, and clear and effective modes of communication—enable creative thinking and adaptability,” said Catherine Ingrassia, Ph.D., interim dean of the College of Humanities and Sciences. “Our students can learn a lot about these essential skills from Indigenous history, literature, and cultural production. I’m delighted that this symposium has solidified the ongoing collaboration between our humanities research centers.”

“This is a great opportunity for the HRC to be the preeminent, internationally recognized hub of humanistic scholarship that VCU deserves. This international collaboration with the Obama Institute at JGU is only the first of its kind. We are just getting started,” Stanciu said.

Stanciu presented a paper, “‘Girls, Take Notice!’: Gender and The Editors of the Indian Boarding School Press,” exploring the current scholarly gap in the study of Native female students’ work as writers and editors of the Native American boarding school press. The title refers to an 1886 poem published in a periodical at the former Carlisle Indian Industrial School in Pennsylvania, which encouraged young Native girls to take cooking classes as a vocation.

In her keynote address, “Carrying Our Ancestors Home: The Importance of Storytelling, Digital Projects, and Centering Tribal Voices,” Mishuana Goeman, Ph.D., a professor of gender and American Indian studies at the University of California, Los Angeles, showed that the archive is not just a place of storage, but also a place of public inspiration for Indigenous art production and storytelling. Talking about a recent digital project, “Carrying Our Ancestors Home”, Goeman shared stories of repatriation and recent efforts by tribal members to tell a new story of archival returns, gesturing at the impact of repatriation on Indigenous communities around the world.

Beth Piatote, Ph.D., a scholar and poet at University of California, Berkeley, reflected in her keynote on the many archives that shaped her mixed-genre collection, “The Beadworkers: Stories,” and shared new experimental work in Nez Perce language and poetry. Acclaimed writer, poet, and scholar Gerald Vizenor read from his forthcoming novel, “Waiting for Wovoka,” which indigenizes Samuel Beckett’s famous play, “Waiting for Godot,” and brings to life a vivid host of Native puppeteers and historical figures in a fictional “Theatre of Chance,” set on the White Earth Reservation in Minnesota.

In the last year and a half, the VCU Humanities Research Center has dedicated scholarly, grant and collaborative efforts to the theme “Race, Ethnicity, and Social Justice.” As part of its initiative “On Native Ground,” the center is involved in the local Pocahontas Reframed Film Festival, the only Native film festival on the East Coast, and has recently launched a Native Artist/Writer in residence program in memory of Monacan author Karenne Wood. Additionally, through its Land Acknowledgment Working group, the HRC leads efforts toward a land acknowledgment process by the university.

The Humanities Research Center, launched in 2014 in the College of Humanities and Sciences, has been recently designated a university-wide research center at Virginia Commonwealth University. As the only center promoting humanistic knowledge at VCU and in the community, the HRC serves to enhance humanistic research, fostering interdisciplinary exchange across departments, and raising the visibility of scholarly work in the Humanities within and beyond VCU.