With a rich menu of more than 20 films, The Pocahontas Film Festival showcased the work of nationally-acclaimed Indigenous filmmakers from the United States and Canada, as well work by emerging local artists. 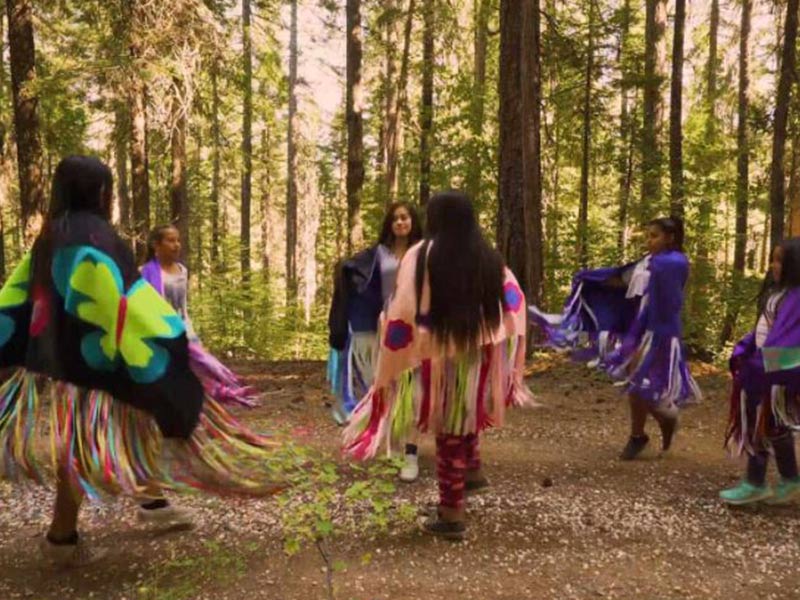 The weekend before Thanksgiving break, the Fifth Annual Pocahontas Reframed Film Festival took place at the Virginia Museum of Fine Arts (Nov. 19-21, 2021).  This year, Suni Sonqo Vizcarra Wood, Quechan and Pueblo, a visual arts student at the Institute of American Indian Arts (IAIA), won the film student award. The Humanities Research Center at VCU was one of the sponsors of this year’s event.

Peter Kirkpatrick, Ph.D., an associate professor in VCU’s School of World Studies, and Cristina Stanciu, Ph.D., an associate professor in VCU’s Department of English and director of the Humanities Research Center, along with University of Richmond Professor Francoise Kirkpatrick, discussed the historical and cinematic importance of a silent film from 1929, “Redskin,” in a panel following the screening of the film on Friday, Nov. 19. One of Paramount’s last silent productions, the film offered both intense criticism of federal Indian policy and an example of technological innovation in its use of two-color Technicolor, a process introduced in 1917. The panel was moderated by Jeffrey Allison, the Paul Mellon Collection educator and manager of statewide programs and exhibitions at the VMFA.

One of the guests of Pocahontas Reframed this year was Choctaw writer and filmmaker LeAnne Howe. On the second day of the festival, Howe presented a new film she wrote and produced (with James Fortier, Ojibwe and Dr. Joshua Nelson, Cherokee), “Searching for Sequoia”—a film about the life and death of the creator of the Cherokee syllabary—which premiered nationally on PBS in early November this year. During her visit to Richmond, Howe also gave a public reading at VCU from her recent book, “Savage Conversations,” in a hybrid event organized by the Humanities Research Center and VCU Libraries, and co-sponsored by the Department of English and the Office of Multicultural Student Affairs.

One of the highlights of the festival was the launch of the Karenne Wood Native Writer/Artist Residency program at the Humanities Research Center, the hub for humanities activities and programs at VCU, announced on Saturday afternoon by Stanciu.

“The residency we are launching today honors the legacy of Karenne Wood and will support an Indigenous writer or artist who will spend time on our campus and connect with local tribes, perhaps also participate in the film festival in the years to come,” explained Stanciu. “Dr. Wood (1960- 2019)—a poet, activist, tribal historian and educator—was a member of the Monacan Indian nation in VA and served as the director of the Virginia Indian Heritage Program at the Virginia Foundation for the Humanities. With support from the VCU Foundation and the VCU Office of the Vice President for Research and Innovation, I have secured funds to support the first year of this program (next academic year) and will continue fundraising efforts to ensure that this residency becomes sustainable in the future. VCU has a great MFA program and an outstanding School of the Arts that the writer/artist can contribute to, in addition to public talks/readings and classroom visits, which will enrich our students’ learning experience. My hope is that we can secure a permanent endowment to make sure that the Karenne Wood Native Writer/Artist Residency continues for many, many years at the Humanities Research Center at VCU.”

This residency will also solidify the existing partnership between the Humanities Research Center, one of the sponsors of the film festival, and Pocahontas Reframed.

“One of the initiatives we launched at the Humanities Research Center this year, ‘On Native Ground,’ includes, a speaker series with Native writers and historians, a faculty working group on Land Acknowledgment, and support for the Pocahontas Reframed Film Festival. The Karenne Wood Residency is part of a broader effort to bring institutional awareness and acknowledgment of the past, present and future of Indigenous peoples in Virginia,” said Stanciu.

“It aims to enhance the visibility of Virginia Indigenous Cultures and Communities and be more intentional and reciprocal in promoting cultural exchanges between the university and the local Native communities. We look forward to a long-lasting partnership with Pocahontas Reframed and its director, Brad Brown, of the Virginia Pamunkey nation.” - Cristina Stanciu

One of the invited speakers at the film festival reception on Friday night, held in the Marble Room at the VMFA, was P. Srirama Rao, Ph.D., VCU’s vice president for research and innovation. “We are proud that the VCU Humanities Research Center is a sponsor of this film festival. We see this partnership as a long-term opportunity to make local Native nations more visible across the university, both in terms of community engagement and faculty and student research,” he said.

Rao acknowledged that VCU faculty and students have been involved in this film festival since its inception in 2017, adding: “We now hope to formalize this relationship though a sustained effort toward reciprocity: not only what local Native tribes can teach us about their history, but also what the university can do to make that knowledge visible across different audiences. One of the four major initiatives where we think VCU makes a significant contribution to society is by ‘enriching the human experience.’ We want to focus on innovation and ways to inform policy change through transdisciplinary knowledge creation, applications in technology and innovations in creative arts and practice. And we seek to improve the awareness and understanding of contributions made by the arts and humanities to our community, society, culture and the world. This includes elevating the human understanding and aspirations through cultural contributions and critical analysis. As researchers, we join with you in deconstructing the myths that keep us in ignorance and refocusing our attention to facts and new knowledge by making it visible to our communities.”

As always, the festival was a hit. "The Pocahontas Reframed Film Festival was an exciting opportunity to experience the rich and diverse culture of Native Americans via film, social interactions, dance, drumming, and other cultural traditions,” said Faye Belgrave, Ph.D., associate dean of equity and community partnerships for VCU’s College of Humanities and Sciences. “I left feeling inspired and motivated to learn and experience more, especially among Indigenous Americans in our region.”