At the U.S.-Mexico border, a sobering, eye-opening look at immigration

Author: Joan Tupponce, University Public Affairs
A VCU community service visit to Arizona earlier this semester offered students a chance to move beyond theory and better understand the reality of immigration in the United States. 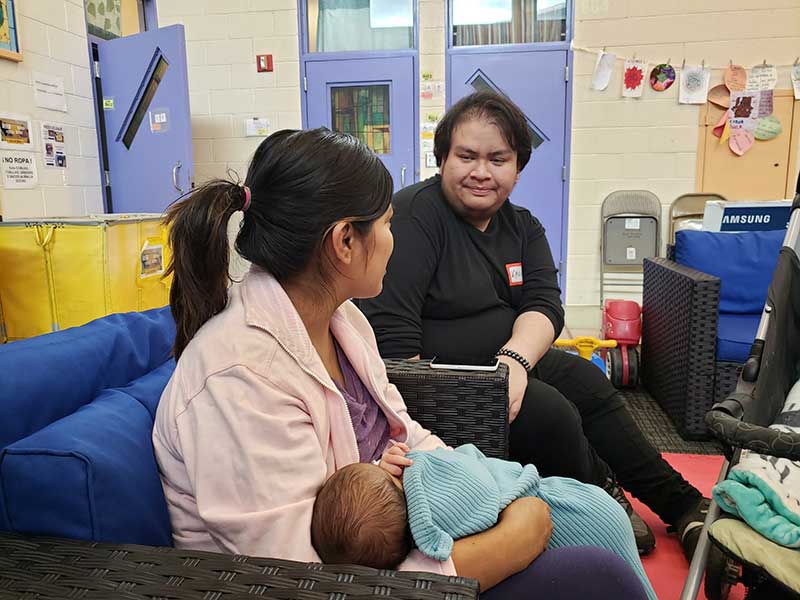 Right: VCU student Kevin Armas Rodas talks to Marisela, a Central American mother who left Mexico with her 10-day-old baby, about her experiences and difficulties at home and crossing the U. S. border. (Courtesy photo)

Editor’s note: The trip referenced in this story took place before VCU modified its academic calendar and operations in response to the COVID-19 pandemic.

Megan Moody couldn’t pass up the opportunity to participate in a community service site visit to the U.S.-Mexico border earlier this semester. Moody, a senior international studies student, found the trip eye-opening.

“The public has only read about the border or seen news stories,” she said. “It’s a different thing to visit the actual border or the towns on the border. It makes it more real to see it in front of you since Virginia is so far away.”

The trip in early March was organized by Anita Nadal, an assistant professor in the School of World Studies in the College of Humanities and Sciences. Nadal wanted to take students to the border before she began offering a summer course, La Frontera/The Border, which is focused on immigrants to the United States with a focus on Latin American women and children. The Office of Service-Learning in the VCU Center for Community Engagement and Impact provided a small grant to help make the trip along with support from the School of World Studies.

Nadal and a group of 12 students traveled to Tucson, Arizona, where they spoke with a federal court interpreter and professors about their activism and their experiences with immigrants who have crossed the border.

“We learned that many of the women from Central American countries are trying to escape domestic violence,” Nadal said. “A lot of them are coming to the border and requesting asylum.”

Walking through the desert was a sobering experience for the group. Students saw shoes, shirts and hats on the ground that belonged to immigrants who had crossed the desert. Several of the students were able to attend court and watch the mass hearings of undocumented individuals. “They said it was hard to be in the courtroom,” Nadal said. “They sat next to the families of undocumented individuals, so students were able to live it and feel it with the families. Two of the students were brought into the country when they were young so this is coming full circle for them. To see this was huge.”

Junior Kelly Nguyen didn’t know what to expect in the courtroom. Many of the cases she saw were for the misdemeanor crime of crossing the border. “We got to hear what the migrants hear. We had the same pair of headphones and we heard the interpretation during the court experience,” said Nguyen, who is studying political science and international studies and wants to be an immigration lawyer.

“It was an out-of-body experience,” Nguyen said. “We saw them in shackles and chains as they entered and left the courtroom.”

Nguyen was surprised to learn the community service aspects of the border patrol. “They do a lot with the community,” she said. “I was able to see both sides of the issue. To see there is still work to be done is important. It confirms what I want to do later on.”

Students spent part of their time in Arizona volunteering at Casa Alitas, a program of Catholic Community Services of Southern Arizona Inc. that provides refugees with care, short-term shelter and help to reunite with family members in the U.S. The students helped build a shed, interpret information and liven up rooms with paint and colorful curtains. The center is a former juvenile detention center that Pima County donated to Casa Alitas, and it was important to make it feel more welcoming, Nadal said.

When they were volunteering at Casa Alitas, the group talked to two families. Marisela is a Central American mother who left Mexico with her 10-day-old baby because of severe marital issues with her husband. Even though she had a C-section during delivery, she made the journey in hopes of reuniting with a relative north of the border.

“We were inspired by her strength and courage despite the obstacles she had to endure to make it to the U.S. border,” Nadal said. “She felt that she had to come in order to have a safe life for herself and her baby."

"The public has only read about the border or seen news stories. It’s a different thing to visit the actual border or the towns on the border. It makes it more real to see it in front of you."

Another family with a deaf-mute son had recently arrived at the refugee center after being released from Immigration and Customs Enforcement. One of the students on the trip who helped interpret information for the family commented on the trauma and fear he saw on their faces.

Trying to build trust with the family he told them "no se preocupe todo va a salir bien,” which means “don't worry everything will be fine.”

“He later shared with me that he was happy to see them relieved from their initial fear,” Nadal said. “The experience meant a lot to him.”

Casa Alitas reflects the Latin American culture to help immigrant families feel more at home. It also provides a variety of needed items such as toiletries, flip-flops and shoestrings.

“They need these because when they are in the U.S. Immigration and Customs Enforcement detention centers they are not allowed to have shoestrings,” Nadal said. “To see the step-by-step process of how you help refugees was powerful for us. Being culturally competent makes all the difference in the world.”

Moody, the international studies student, is grateful she was able to participate in the trip.

“It gave me a perspective in the field of immigration. I want to look into it more, whether it’s focusing on a career or volunteering,” she said.

The biggest takeaway for students was seeing how community and community organizations fill a “huge gap in our country,” Nadal said.

“VCU encourages real experiences and this, for students, was totally real.”